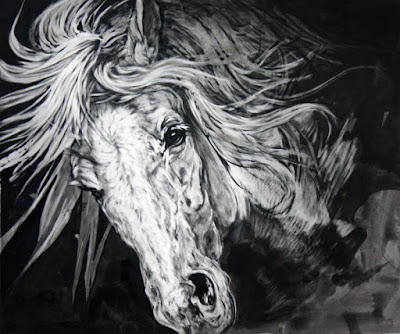 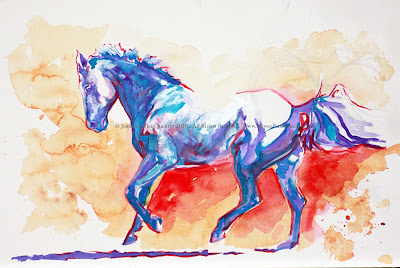 I didn’t exactly explain the name change yesterday.  It’s freshly engraved on my drawing desk, pinned to my bulletin board, and now the new name of my blogspot.  We’ve all heard of exhibitions called “The Horse in Art”.  I have at least three books – lovely, full color coffee table books – celebrating our good friend the horse in art.  It’s a fairly self explanatory title, an exploration of how different artists have depicted the horse in art since those Lascaux pastelists got the jump on all the rest of us.  But “the ART in HORSE”?

I am at a crossroads in my art.  This is nothing new – it’s been building for years.  I know what I love.  I know what moves me.  Bold, exciting color, painterly lines, furioso brushwork, eloquent drawings and elegant etchings.  Sargent, Rembrandt, Rousseau, Albers.  All used their virtuosity to push the boundaries of their art.  (And we won’t even talk about Picasso.)  I don’t think I’m tired of the subject matter.  Horses are my love, they are my passion.  I know them, their musculature and lines and motion, and I enjoy showing the world what can be done with a “horse painting”, especially in a way that hasn’t been done before.

But lots of it HAS been done before.  Lots of tightly rendered pencil drawings.  Lots of finely detailed oil paintings.  Lots of photorealism, and lots of stylization.  Every brushstroke exact, every hair in place, every blade of grass gently waving – sporting art at it’s finest.

Yes, there is a place for that type of art.  Yes, it has a long and distinguished history in the art world. (Stubbs, I’m looking at you.  No really, I am.  Bought a book the other day.)  Yes, some people are amazingly good at it.  Yes, it is art.  But it’s not me.

(Confession: I WANTED it to be me.  I drooled over Carl Brenders art when I was a kid.  I tried and tried for years to render tightly detailed, extremely realistic paintings and drawings.  I finally had to accept that it just isn’t me, and no matter how hard I tried, I only ended up with a disorganized mess or a pounding headache.  One day I just accepted that this is the way I paint, and I apparently I can’t do anything about it.  Life, and art, got much easier.  And my art teachers went nuts.)